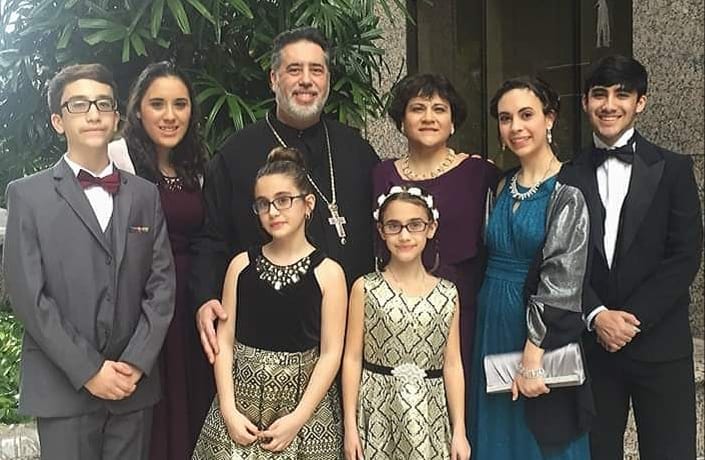 Fr. John was born in Rockland County, New York in 1969.  He was baptized at Zoodohos Peghe Church in Bronz, NY. He moved to New Jersey in the early 1970’s and moved to Port St. Lucie, Florida with his family in 1979.  He graduated from Ft. Pierce Central High School in 1987.  He later moved to Orlando, FL and graduated from the University of Central Florida in 1991 (B.A. Political Science/International Relations).  He was supposed to go into the Air Force ROTC program as a commissioned officer, however he had a calling to the priesthood which caused him to have a career change and apply to Seminary.  He completed his studies at Holy Cross Greek Orthodox School of Theology in Brookline, MA in 1995 (earning an M.Div. Master of Divinity).  Fr. John married Veronica Menis in 1995 in Flushing, NY. He was ordained a deacon in June 1996 in Flushing NY and priest in July 1996 in Ft. Pierce, FL. His first parish assignment was at St. John the Baptist Church Des Plaines, IL as the Associate Pastor (1996-2002). Next, he was assigned as Head Pastor (Proistamenos) of Kimissis Tis Theotokou Greek Orthodox Church in Racine Wisconsin (2002-2015).  He next served as Head Pastor of Annunciation Greek Orthodox Church in Milwaukee July 2015 until Sept. 1, 2019.  He has returned to serve Kimissis in Racine from Sept. 1, 2019 until today. Fr. John has been given the following offikia by the Holy Orthodox Church: Father Confessor in 2007, Oikonomos in 2011 and Protopresbyter on Sept. 19, 2021.  Fr. John since 2017 is the spiritual advisor to the OCWA (Orthodox Christian Women's Association) in Wisconsin.

Fr. John served as President of the Greek Orthodox Metropolis of Chicago Clergy Syndesmos (2014-2018) and previous served as Secretary of the Syndesmos from 2008-2014.  Fr. John was also a representative from the Metropolis of Chicago on the Archdiocese Presbyter’s Council (APC) 2014-2018, and served on the Metropolis Council of the Chicago Metropolis 2008-2018.  He has also served as a board member of the St. Iakovos Retreat Center in Brighton, WI 2012-2019.  Fr. John and Presvytera Veronica have six children, two married: Presvytera Katherine (and Father John) Thetford & Evangelia (and Vanya) Larsen; and Michael, Alexander, Sophia and Elizabeth and two grandsons and one granddaughter.  Fr. John, Presvytera and family currently reside in Pleasant Prairie, Wisconsin. He is very excited about serving once again the wonderful families of the Kimissis Racine parish.

Special Services
At the center of the life of the Church is the Holy Eucharist, which is the principal celebration of our faith and the means through which we participate in the very life of the Holy Trinity. Learn more»